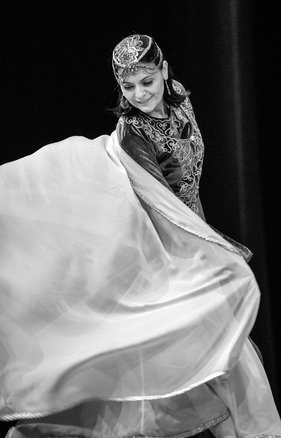 Azita wants to live in a world where dance is part of the daily routine, coffee is free, emails are short, and dance costumes steam themselves.

As a ballerina born and raised in Tehran, Azita has always had a passion for dance. She has been an active participant of Pars National Ballet since was 11 years old under the direction and teachings of Abdollah Nazemi. As part of the performance company, Azita had the opportunity to travel around Iran and Europe, until after the revolution when the Islamic Republic of Iran banned all forms of academic dance.

In 1988 Azita migrated to Canada and quickly decided to forgo her ambition of remaining a ballerina, in pursuit a new goal. Preserving Iranian culture through folk and traditional dances became her focus, thus opening the Canadian chapter of Vancouver Pars National Ballet.

Azita has accomplished a lot during her years in Canada and has received recognition from former Prime Minister of Canada, Hon. Jean Chretien, Former Secretary of State, Hon. Hedy Fry, and most recently Queen Elizabeth's Jubilee Medal. However she would say her greatest achievement and recognition is from her students, having been able to teach the next generation about their heritage through dance. Azita and her performance group have traveled all around the world, both teaching and performing Iranian folk and traditional dances.

Azita's teaching style is like no other, with an abundant amount of knowledge, infinite patience for her students, and passion for her craft. She is well loved by everyone she teaches and collaborates with because of her commitment to representing Iranian culture through dance, as well as her infectious spirit. She continues to thrive, actively teaching and performing, educating and inspiring, contributing and fundraising, despite all the challenges she faces in this endeavor.
Powered by